Paramount Business Jets provides the safest private jets at the best prices for all private aircraft charter services to and from Teterboro Airport.

Teterboro Airport is open 24 hours a day. The general aviation airport is located in the New Jersey Meadowlands, about 12 miles (19 kilometers) from Midtown Manhattan, at 111 Industrial Avenue, Teterboro, New Jersey 07608.

Private jets available for charter to and from Teterboro Airport include the Hawker 400XP and Beechjet 400A light jets, the Learjet 55 and Hawker 800XP midsize jets, the Gulfstream G200 and Citation X super-midsize jets, and the Challenger 604 and Gulfstream G450 large jets.

Teterboro Airport has four fixed base operators to serve elite private charter jet flyers using Teterboro to get to Manhattan. Amenities include executive terminals and a discreet staff that safeguards the privacy of its A-list clients in many ways, including direct vehicle-to-plane ramp access.

Private Jet Charter to and from Teterboro Airport

Teterboro, located in New Jersey’s Meadowlands, is the oldest operating airport in the New York City metropolitan area. It has become known as the gateway for the rich and famous who charter private jets to Manhattan.

Originally the place where Charles Lindbergh and Amelia Earhart flew the earliest planes, the small airport, located a mere 12 miles from the middle of Manhattan, is now used for private charter jets carrying passengers into New York City and surrounding areas. 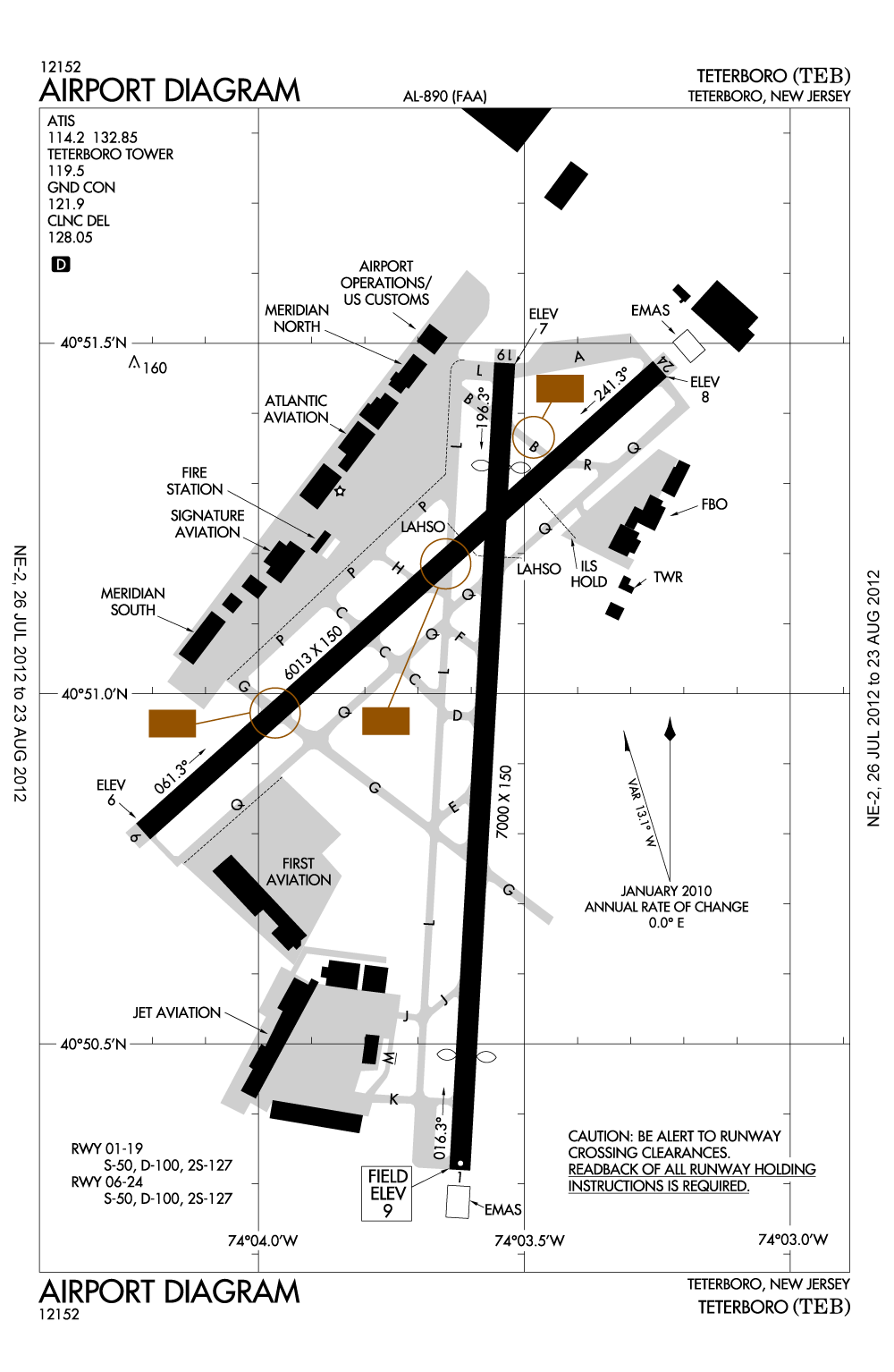 Where do the rich and famous and elite private jet travelers land when flying into New York City?

They land at Teterboro Airport, which is located in the New Jersey Meadowlands, a mere 12 miles from midtown Manhattan.

It’s one of the five busiest airports in the world, some years in the No. 1 spot. The only other U.S. airport on that short list is Van Nuys, where A-listers in private jets fly into Los Angeles. The other three airports in the Top 5 are Paris Le Bourget (LBG), London Luton (LTN) and Al Maktoum (Dubai) International (DWC).

Commercial traffic has been eliminated because Teterboro Airport maintains a weight limit of 100,000 pounds per aircraft.

The lack of commercial traffic and four FBOs make it ideal to charter a private jet at Teterboro. In addition, airport personnel have been trained to be very discreet about the comings and goings of the airport’s clientele. Celebrities choose Teterboro because it is a place where they can slip unnoticed from their private jets into cars or limos that take them into the city.

The Story of Teterboro

A century ago, planes flying into and out of Teterboro Airport were piloted by the likes of Charles Lindbergh and Amelia Earhart. Today, the skies over Teterboro are still filled with famous people but now they are celebrities, movie and sports stars, corporate business executives and other discerning travelers who travel into the New York City area in private charter jets.

Teterboro, which is located in the New Jersey Meadowlands, 12 miles northwest of Manhattan, is the oldest operating airport in the New York City metropolitan area.

The 1.3 square mile valuable piece of land on which Teterboro sits wasn’t always a hub for luxurious private charter jets carrying famous people. It was swampland prone to frequent flooding when New York banker Walter C. Teter bought it in 1917 to build a racetrack. But when his plans didn’t get approval from the state’s racing commission, Teter sold the property to an aircraft corporation that built the airport. It was privately run until being taken over by the New York City Port Authority in 1949. It leased the airport to Pan Am World Airways and then Johnson Controls until the Port Authority regained full control over it in 2000.

In the early days, Charles Lindbergh used the airport to get to New York City to meet with executives from Wright Aeronautical, which built the engine that powered his plane across the Atlantic Ocean. Amelia Earhart did test flights over Teterboro as she trained for her first trans-Atlantic trip.

Teterboro also played an important part in times of war. During World War I, it was the site of a manufacturing plant for planes. During World War II, the Army and the Air Force took over its operation. Over the years, as big commercial airports like Newark International and LaGuardia were built, Teterboro became a “reliever airport,” used by smaller private and charter planes and jets. Most major metropolitan areas have such airports. In Boston, there is Hanscom Field; in Los Angeles, there is Van Nuys Airport.

These reliever airports provide landing spots for passengers who want easy access into major cities without the hassle of commercial flight. There are some 500 takeoffs and landings from Teterboro every day.

But it isn’t just people who are important users of Teterboro. It is also known as a place where human organs bound for transplant are flown in and out of. Getting a plane out at the last minute, something nearly impossible at commercial airports, is routine for Teterboro.

A call in the middle of the night can result in an organ being airlifted within an hour from the airport.

On the east side of Teterboro Airport is the Aviation Hall of Fame and Museum of New Jersey. It was founded in 1972 to preserve New Jersey’s contribution to aviation history.

Men and women who have brought pride to New Jersey through their aeronautical achievements are enshrined in the museum.

It is open to the public for a small entrance fee. More information is available here.

Visually, New Jersey is stunning. It offers both rural mountain areas and the sand-covered Pinelands. As well as this, New Jersey is known for its annual cherry blossoms. Take into consideration some key New Jersey attractions such as Ellis Island, the George Washington Bridge and the Atlantic City Boardwalk, and you can see why so many private jet charters are requested through Teterboro Airport.

If you are thinking about hiring a private jet to fly to or from Teterboro Airport (TEB), it may help you to learn a little more about the most common private jet routes to and from the airport.

What are Teterboro’s airport codes?

There are four fixed-base operators at Teterboro Airport. They are:

Atlantic Aviation TEB is open 24/7 to serve its customers' needs. According to the company website, the services it offers are comprehensive, with ground and international handling, customs and a public notary. Atlantic TEB's large ramp makes it easy for business travelers to get safely in and out of Teterboro Airport. Among the services offered by Atlantic Aviation are:

Jet Aviation Teterboro, a member of the Air Elite Network, offers FBO services that include domestic and international handling as well as maintenance services on all major business jets models and component makers. As an FAA-approved repair station, Jet Aviation does base maintenance, airframe and avionics, line maintenance repair and overhaul. Jet Aviation has an Executive Terminal and offers amenities and services, including:

Meridian Aviation’s commitment to New York City began in 1946, when Ken Forester, Sr., and his brother-in-law, both U.S. Army Air Force pilots during WWII, formed an aviation company that has evolved into today’s Meridian. According to the company’s website, they built a small hangar at Teterboro shortly after the grass runways were paved and opened Mallard Air Service. Three years later, they moved into a new terminal and hangar, and called it the Executive Aircraft Center for Metropolitan New York. Almost seventy years later, the founder’s son, Ken Forester, Jr., manages what has become a modern, full-service private aviation organization.

Among the amenities offered are:

Signature-Teterboro recently completed a five-year construction project that produced a complex of four state-of-the-art aircraft hangars with 120,000 square feet of space with related office/shop space and two Executive Passenger Terminals, conveniently located adjacent to acres of aircraft parking. Signature acquired Landmark Aviation, which had been an FBO at Teterboro, in 2016.

Among its amenities are: