The Raytheon Aircraft Super King Air 350 features seven large, circular windows on either side of the cabin, double club seating, stowable worktables, and built-in refreshment centers. Additionally, the King Air 350 is equipped with in-flight accessible baggage areas, polarized window shades, and a private lavatory in the aft, with a solid wood door and a flushable toilet.

The Raytheon Aircraft Super King Air 350 features seven large, circular windows on either side of the cabin, double club seating, stowable worktables, and built-in refreshment centers. Additionally, the King Air 350 is equipped with in-flight accessible baggage areas, polarized window shades, and a private lavatory in the aft, with a solid wood door and a flushable toilet. 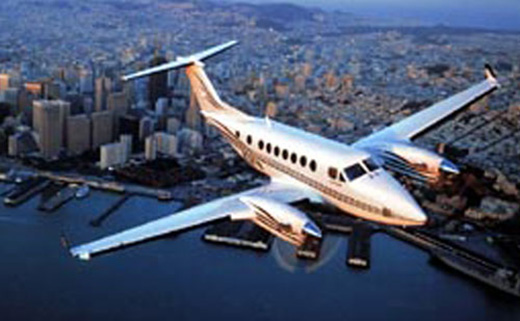 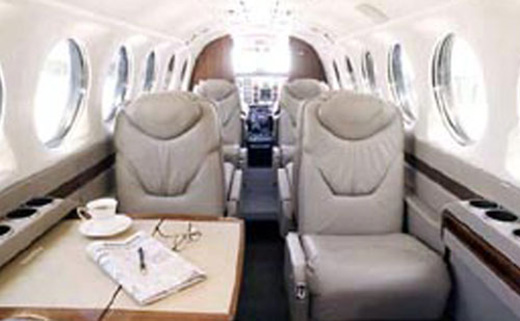 The average hourly rental rate of the King Air 350 is around 2,250 USD per hour.

More about the King Air 350

Key Features of the King Air 350

The cabin of the King Air 350 is typically arranged to accommodate eight passengers in a double club arrangement. In a high-density configuration, this private business jet is capable of seating a maximum of eleven passengers. The cabin of the King Air 350 measures 19.5 feet in length, reaches 4.8 feet in height and stretches a maximum of 4.5 feet in width with a floor width of 4.1 feet. This private business jet features 55.3 cubic feet of baggage storage capable of accommodating 550 pounds of luggage. This large, stand-up storage area is accessible in flight for passenger convenience. With a maximum cabin pressure differential of 6.6 psi, the King Air 350 is capable of maintaining a sea level cabin altitude at an altitude of 15,293 feet.

Capabilities of the King Air 350

No matter how high an aircraft is regarded upon its release, the vast majority eventually make way for a new, upgraded model.

Recently, the idea for the Falcon 5X was completely sidelined after a couple of years to make way for the 6X, showing how small the window of opportunity can be for new aircraft. Even the mighty Concorde eventually saw its day in the sun come to a graceful end.

But the King Air 350 is a special breed. It has shown an admirable resilience over the years, failing to fall behind into obscurity like so many competitors. Instead, Beechcraft’s baby frequently updates and adapts to the modern market. The latest example of this is the technical-sounding Blackhawk XP67A upgrade package.

History traced to the 1930s

Before taking a look at the upgrade, it’s important to understand the King Air 350’s capabilities as a standard, unmodified aircraft. Beechcraft use the slogan “One aircraft, many missions”, and this is certainly an apt starting point. Its versatility is what’s kept the aircraft so relevant.

The King Air 350 is a special breed. It has shown admirable resilience over the years. Picture credit: Blackhawk Aero.

Note that we’re not talking just one generation of aircraft, here. The King Air was born back in the 1930s, just under a different name. And a less glamorous one at that. Model 18 was the first cabin-class twin-engine aircraft aimed at the business sector. By 1958, the regal theme had crept in. Walter Beech, the co-founder of Beech Aircraft Company, introduced the Queen Air. Six decades later, it still bears a significant resemblance to the modern King Air.

The first proper King Air, by name, came in 1964. Within just a few years the company had a major stranglehold on the business twin turboprop market, accounting for 77% of active aircraft.

Fast-forward to 2018 and there are over 7,000 King Airs in action across the world. A typical King 350, unmodified from its base design, can accommodate eight passengers. Safety is paramount to the design, with a built-in feature than ensures – should one engine fail – the propeller is maneuvered to reduce drag.

In August, after more than a year of hard work on the design, the XP67A upgrade for the King Air 350 received the approval it needed from the FAA. Picture credit: Blackhawk Aero.

The aircraft has a range of just over 1,800 nm and can travel at up to 312 knots. It’s capable of reaching 35,000 ft but is famously easy to handle even for some less experienced pilots. Settle down to the 250 knots mark and you’ll only use up around 60 gallons p/h.

From a less technical standpoint, the interiors are both gorgeous and spacious. The standard design incorporates subtle creams and browns which are fitting for a business setting, and the cabin measures 20 ft long, 4’6” wide and 5’ tall. But more importantly, there’s more shoulder room when seated than you’ll find in many similar models.

It’s clear to see why the King Air 350 is a popular aircraft, but part of the secret to its incredible longevity is the ability to upgrade it. Enter the XP67A.

In August, after more than a year of hard work on the design, the XP67A upgrade for the King Air 350 received the approval it needed from the FAA. With it came a host of changes.

A pair of Pratt & Whitney Canada PT6A-60As were replaced with PT6A-67As, complete with a five-year warranty and rated to 1,200 shp. Picture credit: Black Hawk Aero.

First of all, the engines. A pair of Pratt & Whitney Canada PT6A-60As were replaced with PT6A-67As, complete with a five-year warranty and rated to 1,200 shp. Gone are the stock propellers, too. In their place, a pair of MT natural composite propeller assemblies, complete with spinners.

If that wasn’t enough, Blackhawk has added a $50,000 avionics credit to proceedings. This helps offset the cost of the upgrade and is part of their ambition to encourage users to couple the XP67A upgrade with the ADS-B Out. With that being said, the $50,000 credit will also be offered to buyers who have already equipped the ASD-B.

But what does that mean for performance, and actually flying in the upgraded King Air 350?

Blackhawk’s February report on the XP67A confirmed that the upgrade was “beyond [their] expectations”, and that both east and west normal cruise speeds were consistently 30–40 knots faster than the standard. That’s some upgrade.

The pilot, in particular, lauded the aircraft’s climb, which was over 1000 ft p/min at all the way. In a test trip from Las Vegas to Colombia, MS the team managed to shave a significant 40 minutes off the trip. Flying faster, climbing quicker and arriving faster all seem like serious selling points.

Despite these improved speeds and arrival times, the fuel consumption in the test trip was approximately the same as the standard King Air 350 model. This is because the upgraded engines allow the aircraft to climb higher and maintain speed whilst reducing fuel burn. For medium and longer flights, this can make quite the difference.

On top of that, the turboprops are much quieter, reducing the noise pollution produced. Alone this may not be of the utmost importance, but in combination with the above factors, it’s plain to see that the XP67A is already looking like a big success.

“Our tests have shown that the XP67A-powered King Air 350 can fly from sea level to 35,000 feet in just 18 minutes, and has a max cruise speed of up to 340 knots at 28,000 feet,” Mr. Allmon said in a press release. “We’re talking about true jet-like speeds, twice the payload, and far lower operating costs compared to a jet. This is the fastest King Air on the planet, and the performance is just phenomenal.”

The XP67A is just the latest chapter in the long story that is the King Air 350. Based on its history, it would take a brave person to bet against there being many more in the future.