Ramp is the area on the airport, usually paved, that acts as home to particular aircraft based at that airport or aircraft visiting that airport. Typically, each ramp area on an airport is leased by a particular company for the purposes of tying down and holding their aircraft. A ramp is sort of the equivalent to an airplane hangar without the building. It is the space in which the plane either transitions from the taxiway to parking or from parking to the taxiway. 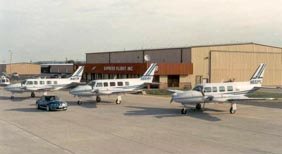 Frequently, companies like flight schools or colleges buy their own ramp at the airport in which they store their aircraft to avoid paying fees from the airport. This saves money in areas like tie-down fees, landing fees, and fuel costs. A tie down fee is a fee charged by a company or airport to tie down an aircraft for the purposes of holding it there. For two basic reasons, tie-down fees don’t normally apply to airline companies. One, they usually have their own ramp, and two, if they don’t have their own ramp, the airliner is usually only at the airport for a short time until it goes to its next destination, where it does have its own ramp. Ramps can be really large or small, depending on the aircraft they are intended to hold. For general aviation aircraft, the ramps tend to be smaller, whereas for more commercial aircraft, the ramps might even be the size of a terminal.

At larger airports controlled by a tower, a pilot would need special permission to taxi to and from the ramp. For instance, a pilot just after landing at JFK International Airport would call ground control and say, "JFK ground, JetBlue345 request taxi from runway 7L to the Jet Blue ramp." The ground controller would then clear the aircraft from its current position to its ramp.