The Instrument Landing System, also known as ILS for short, is a ground-based instrument approach system designed to aid pilots in the landing of aircraft, especially during low visibility situations such as inclement weather or nighttime landings. The system uses a series of radio transmitters and bright, color-coded lights to aid a pilot on runway approach and landing. Each runway that is equipped with an Instrument Landing System has its own procedures on how to approach the runway by Instrument Flight Rules (IFR).

In addition, the localizer frequently transmits a radio message in Morse code, signaling to both the aircraft and the facility that the system is working correctly and ensuring that the aircraft is tuned to the correct ILS frequency. Airports with ILS equipment also usually have several marker beacons, which let a pilot know how far he is from the runway.

The outer marker provides a height and instrument check reading to aircraft that are close to or already on final approach to the runway. This allows the pilot to verify that the ILS is working properly. The middle marker displays the missed approach point, meaning the aircraft must pull up and try again if the parameters are not in line for a safe landing. The middle marker also indicates that the airport should be just within visual range if weather conditions are gloomy. The final inner marker signifies that the runway is directly in front of the aircraft and that touch-down is quickly approaching. 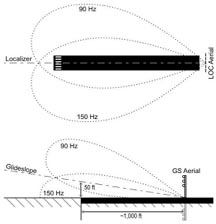